This was an interesting week and the data gives a good representation of it’s peaks and troughs.

I have been in discussion to exhibit work arising from the project’s data. This made me feel full of energy and generally very creative and happy as can be seen in the highs of mood and stoicism mid-week (8 and 7 respectively). I’m not tracking creativity but if i was it would be an 8 out of 10. Ironically since my illness came back I’ve had more time to make work than before. Shame I had to develop incurable cancer to get into this position.

I have been working a lot on the project which has been great but by the end of the week I was beginning to feel tired and my back is sore, again reflected in the discomfort index which reached 4. This could be because I’ve been sitting down a lot and not getting as much exercise as I should, or it could be a symptom of the illness. I shall have to keep my eye on it.

The beginning of the week was challenging, my hair started coming out in clumps which initially was a bit of a shock (plunges in control and mood indexes). I’ve had what’s left shaved off and developed a hat index to account for the headgear I’ve adopted. I also developed a stoicism index to accompany the other mood and affect indexes.

I finished my first cycle of chemo which was a milestone and to which I have had only mild side effects, and I had an important meeting with my specialist where I got my paraprotein results which were good. No detectable levels (again reflected in higher mood, control and stoicism scores).

The scores on the doors 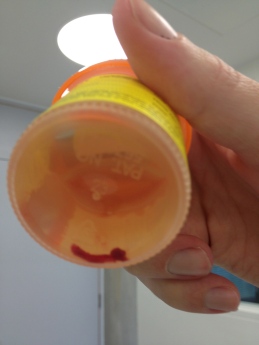 My bloods (Haemoglobin, White cell count, Platelets, Neutrophiils) all stayed stable and in the normal range.

I had the results back from my bone marrow biopsy (image left) and Bence Jones Urine tests, no detectable levels of Paraprotein.

I consumed a total of £771.45 worth of drugs which included chemo and antibiotics.

Thank God for the NHS